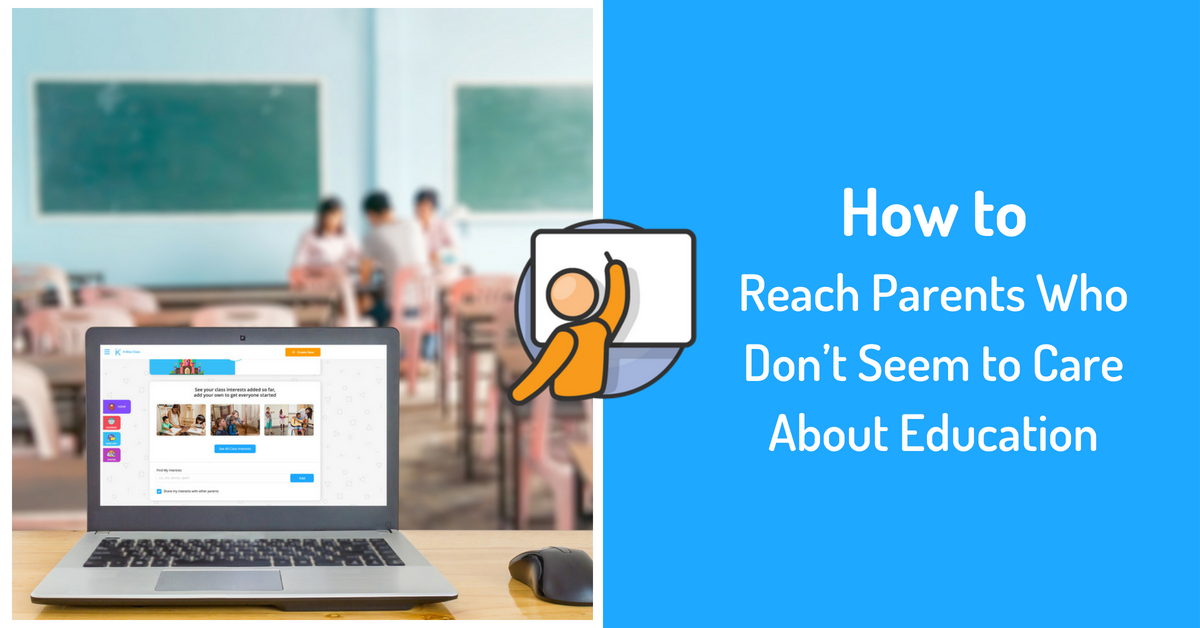 Most teachers we talk to agree that a supportive family is the number one factor in achieving student success. You work hard to come up with ways to involve parents in the classroom and help them support their children’s learning at home. But there are times when trying to reach some parents feels like hitting a brick wall.

You try sending notes and newsletters – parents don’t acknowledge them. You make sure the family knows about the upcoming conferences – they never show up. All your efforts seem to yield exactly zero results. Seeing how it impacts the student is what bothers you the most. As parents never get important information, the student ends up unprepared for special events and misses out. You feel that you’ve tried everything, but the parents just don’t seem to care.

Before you give up on a family and decide to stop trying, take a moment to ask yourself “why don’t the parents react?” Here are the most common reasons why parents appear not to care.

“We send emails and flyers, and parents still don’t seem to know what’s going on!” – When we talk to teachers, this particular frustration comes up again and again. While this is very discouraging, next time you feel ignored by a parent not reacting, there is a number of things you should keep in mind.

“Lots of the parents at my school don’t read English, and some don’t read at all” – agrees Captain Awesome, an education blogger.

Negative experiences from the past

Also, the schools haven’t always been as open to diversity and in tune with individual students’ needs. Many parents still hold on to negative associations from their time as students. They remember the time when a call or a visit from a teacher meant they’ve done something wrong. If they experienced bullying or other troubling events at school, they will avoid school events if they can.

Additionally, the idea that parents should be actively involved in the classroom wasn’t as widespread twenty or thirty years ago. It’s likely that their own parents (your student’s grandparents) weren’t as involved, and the parents don’t fully understand what’s required of them.

Financial difficulties impact families’ ability to engage in many ways. They might work several jobs to make ends meet or have an exhausting commute. Many families still have no internet access.

“The phone numbers of our parents regularly change as they can’t afford to pay their bills each month. We don’t always receive notice when a phone number has changed or if the phone is turned off” –  a primary school teacher told us.

Teachers often think they would know about such problems, but many parents feel ashamed and might even actively try to conceal their difficult circumstances. As a result, they will make up alternative reasons for not attending, or won’t reply altogether.

A whopping 21 percent of US residents speak a language other than English at home. Remembering that many students return home to different values, customs and culture can help teachers understand some of the communication challenges. The fact that parents aren’t highly involved doesn’t mean they are not supportive.

“There are real cultural differences in the ways parents reinforce and support what we teach” – says a seventh grade English teacher, who teaches at an urban charter school for refugee and immigrant kids.

Did you know that ClassTag will automatically translate your messages to parents into the language of their choice? It also translates your message to their preferred type (email or SMS) and reaches them on any device (even before they sign up).

The number of kids living in single-parent homes has almost doubled since 1960. Almost 20 million children today grow up in a home where only one parent is present. Challenges of raising a child alone are immense and single parents still face a lot of judgement, instead of much-needed support.

The bottom line is, most of the parents do care, but there is a multitude of potential reasons why they appear not to. These reasons range from as fundamental as the ability to read to simply feeling of overwhelmed with school communications and not knowing what is expected of them.

The key to overcoming parent disconnect is uncovering the why behind parents' lack of interest.
Click To Tweet

How teachers are uncovering the why

From “busy” to lack of meaningful opportunities

Here is a story shared by ClassTag founder and CEO that was a light bulb moment leading to the creation of ClassTag, a free parent communication and scheduling platform.

When her daughter was in preschool, Vlada was receiving a lot of communications from her school about what her daughter Sophia is learning, different volunteering opportunities and events she could attend. However, the messages never quite got to her, the teacher was losing her every time and not for lack of trying! It all changed one day when her daughter’s teacher asked her to talk for a few minutes after drop off.

The teacher started by saying how well her daughter is doing and asking why Vlada doesn’t take advantage of the opportunities to come and volunteer at school. On the first ‘why’ Vlada responded that she is busy and often travelling and it is hard to find the time. On the second ‘why’ it became clear that she finds school communications overwhelming and not certain how to prioritize her engagement. At last, getting deeper into the situation, the teacher uncovered that Vlada doesn’t find the opportunities offered relevant and able to contribute to. As she put it: “between a bake sale and an art project, I am not sure what I can do as a poor baker and only a slightly better artist.” Then the teacher asked her what she would like to do and they agreed on an opportunity to volunteer during the multicultural week, sharing her traditions and culture  Vlada cared deeply about.

As Vlada was decorating Ukrainian wreaths with Sophia’s classmates, her eyes met her daughter’s, and she saw an incredible light that she will never forget. Then Sophia’s classmates asked her how she made the wreaths so well and Sophia answered: “My mom knows everything!” This was really a turning moment for Vlada, she was engaged and volunteered at school events many more times since this story.

Another powerful example of overcoming parent’s lack of interest was shared by Carolyn, a 3rd-grade teacher in Texas. Carolyn told us about how she uncovered the real reason why one of the parents in her class, Mary, appeared not to care and the amazing success they were able to achieve once they got on the same page.

After several months of trying to reach Mary, Carolyn managed to set up a meeting to check-in. She admitted that she went into the meeting with a lot of assumptions, but what she found out was eye-opening.

Carolyn noted that it had been hard to get responses from Mary and asked her why. Mary’s response was initially reserved as she explained she was “busy”, but as Carolyn explained that teachers are here to offer support, Mary shared what had been going on in their household. Her marriage had recently broken down, and her partner wasn’t making things easy. He refused to support their daughter, and she was forced to pick up an extra job involving a long and inconvenient commute. In these circumstances, she was focused on “keeping it together” for her child and maintaining a safe and stable home environment. Additionally, because of her new job, attending school events was simply impossible.

Knowing this, Carolyn offered involving a counselor that would talk Mary’s daughter through the transition. They agreed to check-in bi-weekly by phone at a specific time during Mary’s commute. Needless to say, this was a big breakthrough for all parties involved and first and foremost Mary’s daughter and Carolyn’s student who now had three adults working together to help her succeed.

There are always exceptions, but in many cases, there is a lot to be gained by thinking about parents’ lack of engagement with a fresh dose of compassion.  The next time you don’t receive a response you’ve been hoping for, consider possible obstacles rather than chalk it up to apathy. Sometimes taking a moment to reflect and ask “why?” is all it takes to turn a student’s life around.